Construction has started on the RHS Chelsea Flower Show Garden for M&G Investments. 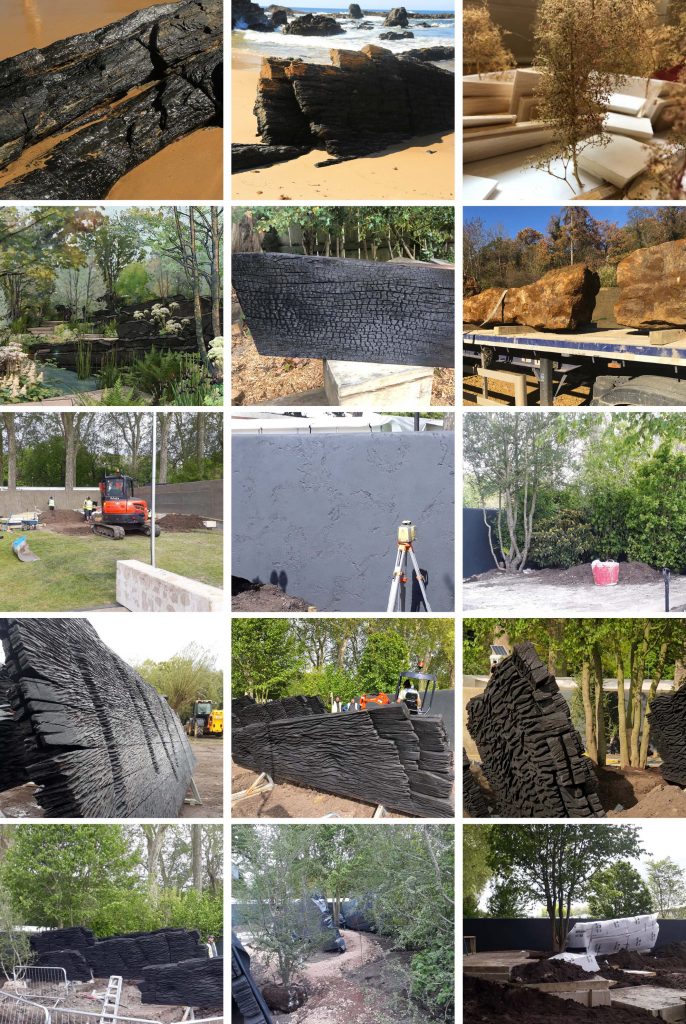 The garden is inspired by stratified rock formations, huge burnt timber sculptures on a dramatic geological scale slice through woodland planting. First and foremost, this is a garden but it is also a sculpture in its own right and celebrates the ability and power of plants to colonise habitats in what is known as ‘ecological succession’.
Pioneer species like algae and lichen are the first to colonise harsh barren environments such as lava flows, newly quarried rock faces and sand dunes. Combined with wind and water, rock breaks down and soils form as the habitats are normalised allowing grasses, ferns, herbs and ultimately shrubs to grow. Within the garden the use of primitive plants like mosses, restios, ferns and equisetum are intended to acknowledge these early arrivals and to lend the garden an ancient quality. The shade that shrubs and ultimately trees provide is vital to the continued evolution of a habitat but eventually a ‘climax community’ is reached which then ceases to evolve further.
Secondary succession is then caused by a subsequent event. On a local scale this could be a tree falling or something more initially devastating such as a forest fire. This is acknowledged here by the woodland clearings and the intentional ambiguity of the burnt timber ‘rock’ formations which combine the concepts of both primary and secondary succession. These disruptive events create opportunity which plants seize upon and should be seen as positive occurrences. The increased light levels caused by the loss of a tree stimulate germination of the previously dormant seed bank in the soil. Fire can have powerful regenerative effects also causing seeds to germinate such as Epilobium which is known as ‘fireweed’ due to the way it rapidly colonised bomb sites in WWII. These ‘fire followers’ are typically annuals but can also include shrubs which shoot from the base of their stems.